We’re in for a bumper year!

On behalf of myself, Corrie, Nick Torjussen and the team at Highland Park, we hope that 2015 is going to be a great year for you. As soon as we returned to the office, we hit the ground running, as the amount of mortgage applications for January 2015 is at a record high.

I predict further house price increases in Auckland. With interest rates set relatively low, and the uncertainty of 2014 all but a distant memory, I predict that more people will be looking for investment properties, and first home buyers will feel more confident in stepping onto the property ladder.

2014 was an uncertain year. We saw interest rates increase and had to deal with the new LVR limits imposed by the Reserve Bank. The elections also affected the market towards the end of the year, and these factors had people on a “wait and see” strategy.

With rates predicted to stay low or unchanged until late 2015, and funding available up to 90%, in a lot of instances, I predict that the house prices will rise even more. Even though the numbers of consents are at record levels, it will take time for that stock to come onto the market. We are also still in an environment where the number of listings available on the market is quite low compared to historical numbers (see graph). Therefore the whole supply and demand factor comes into play. 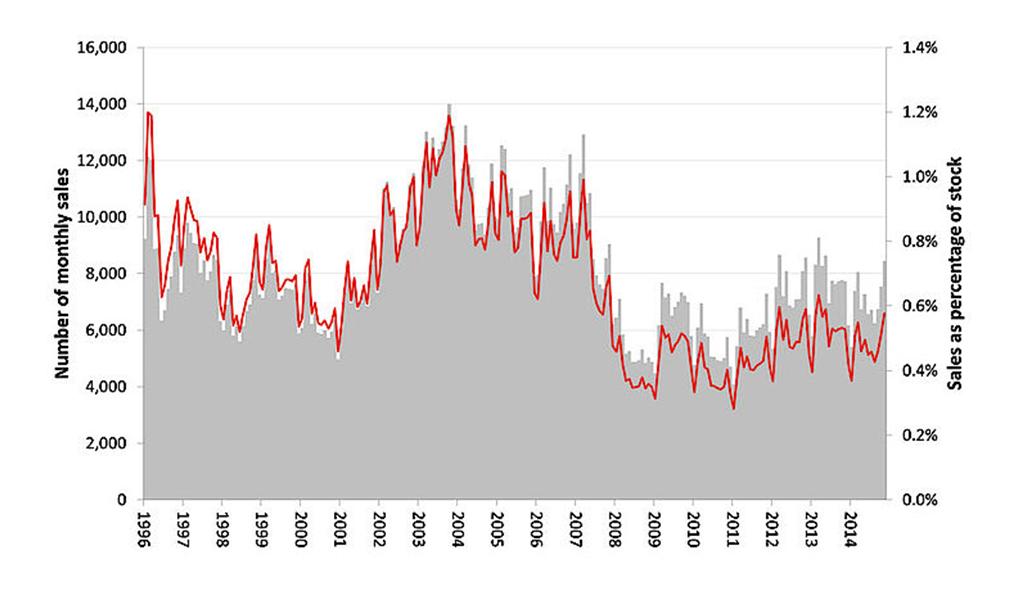 "Trading partner growth in 2015 is expected to be similar to 2014, though the outlook is weaker than anticipated last year. Divergences continue among regions, with growth in China, Japan and the euro area easing in recent quarters, while growth in the US has remained robust.

World oil prices have fallen 60 per cent since June last year, which will boost spending power in oil importing economies but reduce incomes for oil exporters. The oil price decline, together with uncertainties around the transition of US monetary policy, has led to an increase in financial market volatility.

The lower oil price will have a significant impact on prices and activity in New Zealand. The most direct and immediate effects are through fuel prices, with the price of regular petrol falling from a national average of $2.23 in mid-2014 to $1.73 currently. This will increase households’ purchasing power and lower the cost of doing business.

Annual economic growth in New Zealand is above 3 percent, supported by rising construction activity and household incomes. The housing market is showing signs of picking up, particularly in Auckland. However, fiscal consolidation, the reduced dairy payout, the risk of drought, and the higher exchange rate will weigh on growth.

While the New Zealand dollar has eased recently, we believe the exchange rate remains unjustified in terms of current economic conditions, particularly export prices, and unsustainable in terms of New Zealand’s long-term economic fundamentals. We expect to see a further significant depreciation.

The higher exchange rate, low global inflation, and falling oil prices are causing traded goods inflation to be very weak. Non-tradables inflation remains moderate, despite buoyant domestic demand and an improving labour market. Headline annual inflation is expected to be below the target band through 2015, and could become negative for a period before moving back towards 2 percent, albeit more gradually than previously anticipated.

In the current circumstances, we expect to keep the OCR on hold for some time. Future interest rate adjustments, either up or down, will depend on the emerging flow of economic data."

Anyone with more than 20%, equity on their house can get a 1yr fixed rate up to a 5yr fixed rate for less than 6%, interest. If you’re in this position and looking to fix your mortgage payments for the foreseeable future, then I would recommend going for the longer term option.

Keep in mind that the historical average rates in New Zealand are 7.5%, and if you can get a 5yr fixed rate for less than 6%, then that’s good value (at least for a portion of your mortgage).

Here’s a question we get asked a lot: Do we negotiate rates for clients when their rates are due to be refixed? And can we apply for a top-up loan on their behalf if they’re doing some renovations at home? The answer to both these questions is yes, absolutely. Just send us an e-mail and we’ll do all the legwork for you.

Can those over 40 years old buy a first home?

For the last wee while there’s been negative press about the inability to get a foot on the property ladder, especially if you’re over 40 years old and living in Auckland.

It all seems very pessimistic, but I take the glass is half full approach. That is, if you’re diligent about saving then you can certainly buy a first home – I’ve seen it happen.

In my next newsletter I’ll tell you about a couple that just bought their first home with only a 5%, deposit (and yes, they’re both over 40 years old). If you know of someone who is similarly struggling to buy then please put them in touch with me, as I can help.

If you have any questions about what I’ve discussed this month, just let me know.